ORIGINS OF RADIO BROADCASTING IN DALLAS AND FORT WORTH

Charles Henry Garrett may not be a household name to Texans, but his fascination with electronics inadvertently earned him a permanent place in the history of not only 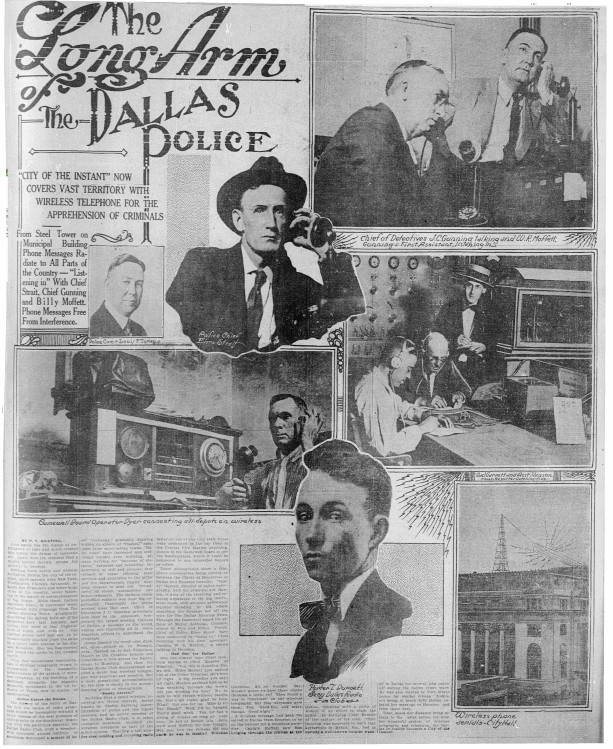 The seed of Garrett’s fascination with wireless was planted in 1912.  Henry, or “Dad” as he was often referred to, was an electrical engineer for the Dallas Fire Department.  As the story goes, one day a huge fire broke out at a lumber company on the south side of

In the following years, Garrett spent his free time experimenting with homemade receivers incorporated into the frame of his car.  He eventually succeeded in receiving weak voice transmissions in his car at a distance of five miles from the central fire station – Garrett knew he was on to something big.

By the late 1910’s, there were already a few radio amateurs experimenting with wireless transmissions:  Frank M. Corlett of

The concept that Garrett had for the fire department soon turned into something even bigger:  equip the Dallas Police Department with a wireless operation so that news of crimes could be sent out across the land and criminals would be unable to simply slip out of town to escape being caught.  Plans were drawn up in early 1921, and on June 4 of that year under Garrett's direction, the Dallas police radio system officially began sending out its nightly reports.  Both by Morse code and by voice, the reports sent out from the second floor of the Dallas Fire Hall gave descriptions of persons wanted and other important police information.  These were the humble beginnings not only what would evolve into radio station WRR, but also of broadcasting in north Texas.

(The Dallas News gave the operation a full page feature in August 1921, Garrett can be seen with headphones on in the middle of the right side middle photo.)