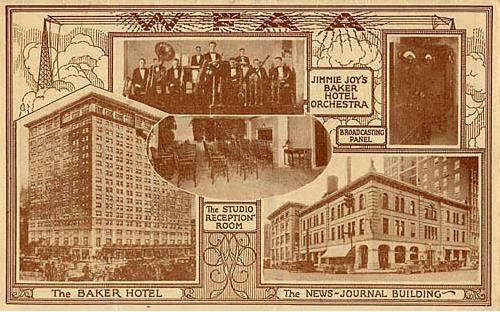 A reception card for WFAA displays its location in the Baker Hotel (on the 17th floor) in downtown Dallas.

Henry Clay Allison was a chiropractor by trade, but he also had a huge passion for radio.   He purchased KFJZ from its founder Bill Branch in 1928, only to turn around and sell the station to former Fort Worth mayor and department store owner H.C. Meacham a little over a year later for a profit of $10,000.  However, Allison was not done with radio yet.

In early 1933, he applied to the Federal Radio Commission to start a new 100 watt radio station in Fort Worth at 600 kilocycles.  In June, the commission rejected his application on the grounds of unsatisfactory equipment and transmitter location.  Dr. Allison did not let this ruling deter him though, and he went ahead and built his new station anyway - license or not.  He gave his operation the unofficial call letters of "K-Y-R-O", after his primary vocation.  His operation seemed so legitimate that the Star Telegram even included it in its radio listings.  KYRO was perhaps one of the most prominent pirate radio stations to have ever broadcast in north Texas, but the station's popularity soon became its downfall.   The Federal Radio Commission shut down Allison's station in September and arrested him.  Eventually Allison was found guilty of "unlawfully operating a radio station without a federal license".   Allison didn't have to serve any jail time, but he would never indulge his passion for radio again.
(special thanks to Jeff Miller for his detective work on KYRO!) 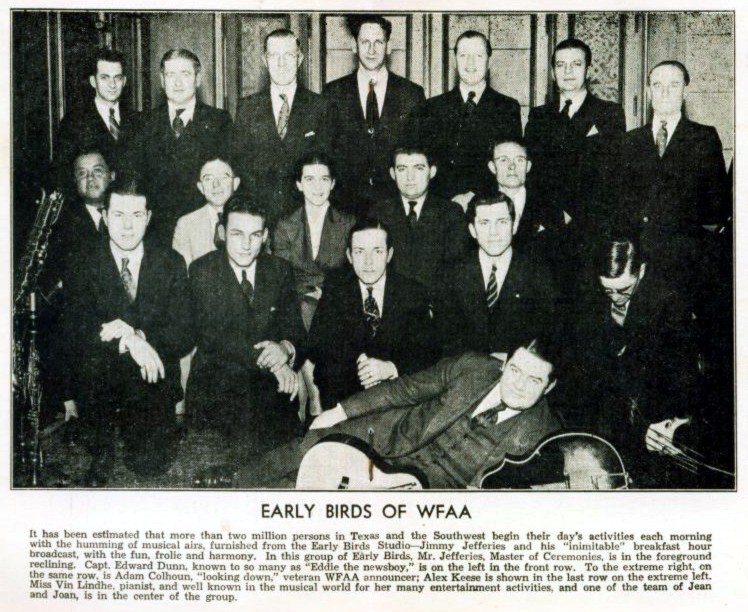 The advertisement at right appeared in an edition of "Radio Log" and touted Jimmie Jeffries and his "inimitable breakfast hour broadcast".   It also claimed that more than two million people in Texas and the Southwest tuned in to the "Early Birds" every morning! 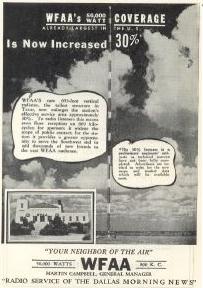 At right:  a print advertisement heralds WFAA's new transmitter near Grapevine (near the present-day intersection of Highway 114 and Freeport Pkwy.)   Note the ad does not mention the plant is shared with WBAP.

In case you thought move-in stations were a relatively recent phenomenon, there is KGKO to prove otherwise.   The Wichita Falls station was purchased by Amon Carter, and moved to Fort Worth (the large 570 signal still covered Wichita Falls, but was now much stronger in Fort Worth and Dallas.)

KGKO's new studios were built in the Medical Arts Building in downtown Fort Worth, and a new transmitter plant (at right) was built south of what was then the small town of Arlington.  (The site was demolished in the 1960s when Spur 303 was built.  There is a Vietnamese restaurant where the building you see to the right once stood.)

It is doubtless there was a bit of political maneuvering involved in moving KGKO - before the move, Carter only had a radio operation half the day, with WBAP being off the air while WFAA occupied the 800 frequency.  That problem was now resolved, as Carter could shift programming to KGKO that would otherwise not air.  KGKO's move 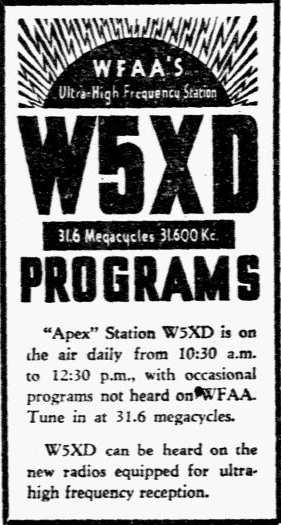 also gave NBC an affiliate for its Blue network in the southwest.

Also new to the north Texas airwaves in 1938 (but heard by very few,) was W5XD - the "ultra-high" frequency experimental operation of the Dallas Morning News.  Though the station itself didn't last a long time, operations like it and others around the country helped pave the way for what was to arrive during and after World War II: FM broadcasting. 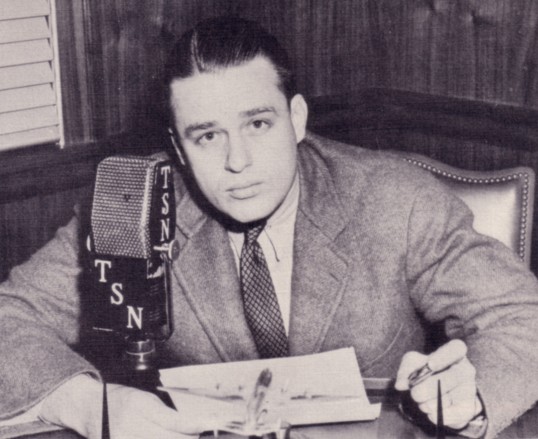 together with his wife Ruth, purchased KFJZ-1370.  The next year, they saw the opportunity to improve their investment.  KFJZ operated with only 250 watts, on the undesirable high end of the radio dial.  Meanwhile, KTAT was operating lower down the dial (at 1240) with higher power (1000 watts).

The Roosevelts bought out KTAT in July of 1939, and a month later surrendered the license of the weaker 1370, moving KFJZ down the dial to the superior 1240 facility.  Under the guidance of the Roosevelts, KFJZ became a Mutual Network affiliate, and formed its own regional network - the Texas State Network.  TSN still provides news and programming to affiliates throughout the region to this day.